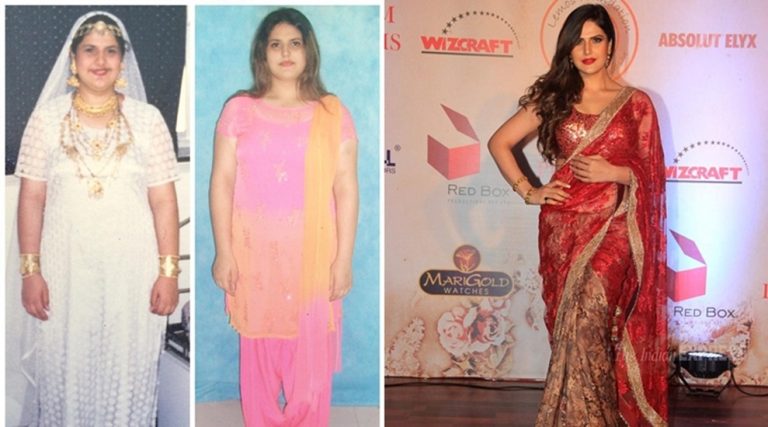 We’re talking about the actress who first made her debut in the movie Veer, where the body shamers couldn’t talk about anything apart from her weight. Then she did an item number in the movie Ready, and all everyone could talk about was her transformation weight loss. Yes, we’re talking about Zareen Khan who put all the body shamers to shame by losing a jaw-dropping 40 something kgs in just a few months!

Zareen Khan initially weighed 100 kg’s when she was cast in the movie Veer. She claims, since she wanted to be a doctor and not an actress, her weight never bothered her. The actress says “I thought that it really wouldn’t matter how I looked if I were a doctor”. Then she decided to become a model, which is when she lost 43 kg’s – just like that! Within a few months, with a proper diet and exercise, she shed that weight away. According to Zareen Khan “I just developed a strong willpower which helped me curb my food cravings and be regular with my walks. In turn, it motivated me to push myself further.”

So what did her workout regime consist of? Every morning she did Pilates for an hour! She would indulge in weight training three times a week and also started swimming and jogging. She alternated between various forms of cardio to keep her from getting bored. She even started doing yoga, which helped her get really toned and stretched her muscles.

Zareen khan followed a strict high protein diet. Her breakfast consisted of eggs, brown bread, fruits, and sprouts. For lunch and dinner, she ate brown rice with vegetables and chicken. Her hourly snacks consisted of coconut water, clear soups, and sprouts. She said that sweets and fried food were a strict no-no for her. She also ate every 2 hours to increase her metabolic rate. The actress said ““I hate the concept of dieting. I think it’s very unrealistic. I don’t deny myself anything. I stick to a high protein diet which has a lot of veggies and juices. I am obsessed with drinking a lot of water.”

In fact, Zareen Khan even rejected a 1 crore offer to endorse a fat loss pill. She says she rejected the offer because she cannot endorse something she doesn’t believe in. Her weight loss journey required a lot of effort, so she believes that there is no shortcut. On one of her Instagram posts, she wrote “No Shortcuts… Only pure hard work! #IWillBeMe”, and we couldn’t agree more!